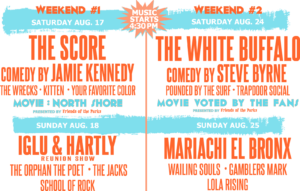 The popular FREE community event returns to the sands of the quintessential Southern California beach town over two weekends in August, and for the first time ever, is expanding to both Saturday and Sunday (August 17/18 and August 24/25) at 5 p.m. each day with a jam-packed lineup of music, comedy, movies on the beach and other family-friendly experiences.

These concerts are some of the most popular events in the South Bay and the crowd numbers well into the thousands. Arrive early to claim a prime viewing spot because EVERYBODY will be there! The schedule and line-up are as follows:

Saturday, August 17 – Billboard chart-topping Australian alternative rock outfit Atlas Genius which scored a major radio hit with the track Trojans. Actor/comedian Jamie Kennedy (MTV, Scream, “Malibu’s Most Wanted”) will perform a stand-up set alongside LA indie rockers The Wrecks, alternative locals Kitten, and the OC’s Your Favorite Color. Live performances will be followed by a surf side screening of the cult favorite film North Shore at 8:30 p.m. presented by Hermosa Beach Friends of the Parks.

Sunday, August 18 – It will be a reunion show by LA rockers Iglu & Hartly. Rounding out the bill is Columbus, OH pop rock trio The Orphan The Poet, LA rock band The Jacks and School of Rock

Saturday, August 24 – Los Angeles’ The White Buffalo (the stage name of musician and singer/songwriter Jake Smith) who has performed at numerous music festivals around the world. Comedy favorite Steve Byrne (“Sullivan & Son”, Comedy Central, Chappelle’s Show) will also perform stand up, along with additional music from instrumental alternative surf group Pounded By The Surf and LA’s Trapdoor Social. The evening comes to a close with a surf side screening of another classic movie via Hermosa Beach Friends of the Parks at 8 p.m. as voted on by Hermosa Beach locals.

The concerts will take place on the south side of the Hermosa Beach Pier.