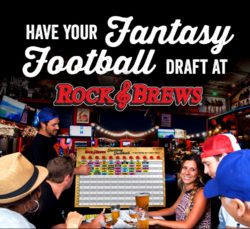 With the purchase of a party food package, guests will receive the use of a draft board complete with easy-to-remove stickers with each player’s name.

“Rock & Brews is excited to provide fans with the ultimate experience for their Fantasy Football draft parties,” said Michael Zislis, co-founder and CEO of Rock & Brews. “Football, friends, great food and brews in a rock and roll atmosphere make Rock & Brews the perfect place to be!”

For more information on the Fantasy Football package at Rock & Brews: