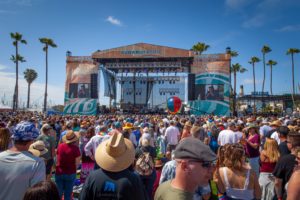 It’s official…. the three-day BeachLife Festival went off without any major glitches! (Read it and weep, Fyre Festival!)

That’s quite an undertaking when you consider all the moving parts involved in this event, not to mention the YUGE number of personnel working to pull it off. I don’t know the number of paid staff, but there were hundreds of volunteers working for a free, one-day pass. Kudos to Allen Sanford of Saint Rocke and his team. I know they have a ton of experience putting on large scale concerts but BeachLife was well beyond that.

Sunday was just as crowded as Saturday and there seemed to be even more attendees later in the day. Ziggy, followed by Willie, will do that.

Some of the Day Three highlights…

Colin Hay, whom we know from the Australian band, Men At Work, got the crowd juiced with his set. His gorgeous voice sounds exactly like it did back in the day!

Local band Venice did their thing on the Low Tide stage…. and it just so happens the photographer I worked with for this event, Sam Spence, went to Venice High School…. and Venice played at his prom. Small world!

Grace Potter was PHENOMENAL and did a fine job cranking up the crowd.

Blues Traveler was right on point and they sound as good as ever…. maybe better.

There were a few musicians that required the professional photographers to sign nutty, multi-page waivers. It was such a pain, I told Sam to skip them, so I ended up taking some really bad photos and really awful video (this is a skill set I admittedly lack). But that’s the breaks. Anyway, here’s some crappy video of Ziggy….

And then there was Willie…. Only four photographers from major media outlets (Rolling Stone was one) were allowed to photograph him, and it was left to me to do him justice. I failed miserably.

The inaugural BeachLife Festival has concluded and everyone that attended will attest it was a rousing success!

Later in the week, I’ll be posting a bunch more pics from the event, so stay tuned!