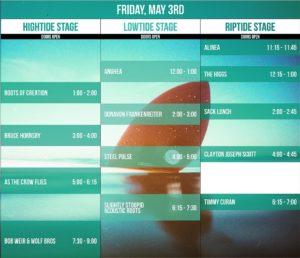 The inaugural BeachLife Festival has had the South Bay in a heightened state of anticipation for weeks – and it’s finally here.

Let me say right up front, the price of general admission was worth every penny. I’m not a fan in general of VIP tickets because it segregates you from most festival attendees….. and isn’t that the point of going to a festival, to be among the multitude? In this case, VIP pass holders had access to fancier port-o-potties and elevated viewing platforms with beverage tents. If waiting less time in line for a beer is vital to your festival experience, by all means, shell out the extra bucks!

The venue was meticulously designed to enhance flow from one stage to another. In addition to three separate stages, there were several other constructs and activity hubs spread throughout the festival grounds including a video game arcade, shade area with picnic tables, The Rockefeller tent featuring craft brews, the Body Glove Bar, the Bungalow bar, merchandise tents, an art center, backyard games, cabanas, food court and food trucks. There was enough time between sets to peel off from the crowd and indulge in some of these other activities.

The music line-up covered a range of genres from across the decades and featured everything from hyper-local bands to world-class acts. The Day One line-up included: Alinea, Anuhea, The Higgs, Roots of Creation, Donovan Frankenreiter, Sack Lunch, Bruce Hornsby, Steel Pulse, Clayton Joseph Scott, As the Crow Flies, Slightly Stoopid, Tim Curran, and headliner, Bob Weir & the Wolf Brothers.

A few of the Day One highlights:

Alinea, a local group and the Winner of the “2019 Battle of the Bands” contest benefitting the Redondo Beach Police Department, won the opportunity to play at the festival and showed us their chops!

Chris Robinson, front man for As the Crow Flies (and The Black Crows) wowed the audience with his incredible energy.

The big news was Bob Weir sitting in with Slightly Stoopid before his own set. As you would imagine, the Dead Head set attended in force.

About halfway through the day, I spoke with Chief Kaufmann of the Redondo Beach Police Department and he told me there was not one complaint filed about the event. Not one.

Surprise, surprise – even the weather cooperated! Blue skies, perfect temps and no May Gray in sight!

So there you have it – Day One of the BeachLife Festival was a smashing success!