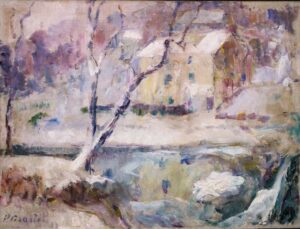 Curated by Aaron Sheppard, the show presents selected works from the artist’s estate. The exhibition is open to the public on the PVAC website.

Paul Jean Martel is an artist who defies easy categorization. Equally rooted in the European traditions of the French and Belgian fin-de-siècle avant-garde and the academic realism of the early twentieth century Pennsylvania Impressionists, Martel’s paintings reveal a life-long passion for the paint medium. Martel’s oeuvre mirrors the dynamic evolution of European Modernism. With a nod to French Impressionism and Post-Impressionism, Belgian Neo-Impressionism, and the Nabis, Martel’s stylistic influences are diverse.

During his career, Martel exhibited alongside Mary Cassatt, Henri Matisse and Pierre Bonnard, among others. Inspired by the series paintings of Claude Monet, his interest began to shift from depicting the subject itself to a focus on the ephemeral atmosphere within which it was surrounded, which he attempted to capture over time in his paintings of Central Park in New York City, as well as in his more pastoral scenes of the countryside.

View the exhibition at https://pvartcenter.org/paul-jean-martel-1879-1944-post-impressionist/.