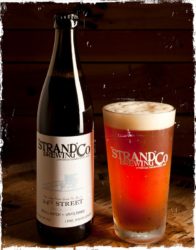 Strand Brewing Company is celebrating their anniversary with a Beer & BBQ Festival over three days, from November 11 through November 13.

From grain to glass, Strand Brewing Company has been brewing beer their way for seven years. Starting in 2009 with the help of friends and family, Rich Marcello and Joel Elliott set out to make a beer that they love and create a space in which they would gladly spend most of their time. They have greatly surpassed their modest goals and wish to thank those friends and families who made this all possible.

To celebrate properly, Strand will be tapping several specialty beers over the course of the weekend. Local Torrance pitmaster Dustin Bartz will be on hand with mouthwatering Bartz BBQ. This event is free to attend and all ages are welcome.

When Strand began, they were the only brewery in The South Bay and one of only three in all of Los Angeles County. At the time of this press release, there are over 60 breweries operating in Los Angeles County. This festival is a chance to honor the history of craft beer in Southern California and to celebrate its future at one of the breweries that started the movement here in LA County.

This event also marks the one year anniversary of moving the brewery from is very humble beginnings on Telo Avenue to its current location at 2201 Dominguez Ave. Still residing in Torrance, the move was a strategic upgrade in elbow room going from 1000 square feet to 36,000. With plenty of space to grow, the brewery intends to do just that, increasing output and expanding their portfolio.