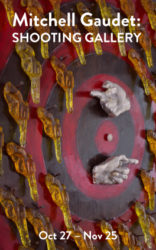 His new exhibit, Shooting Gallery, uses the visual seduction of glass to comment on a gruesome American phenomenon: school shootings. Also included are metal castings of toy guns, and sculptures made of found objects, such as shooting trophies coupled to antique school bells. Focusing on the traditions of Americana, the exhibit also includes a carnival shooting booth with a twist – instead of tin ducks, fleeing school children mixed with so-called “active shooters” are the targets. The object is to hit the shooters without taking out a child.

The Little Prince features paintings by DeLoss McGraw inspired by the novella by writer, poet, and pioneering aviator Antoine de Saint-Exupery. DeLoss McGraw is an American artist known for his whimsical gouache paintings. Inspired by his own poetry as well as poems by W.D. Snodgrass, McGraw’s dreamlike works are often reminiscent of paintings by Paul Klee. Klee, like McGraw, was inspired by the works of folk artists and children. Born in 1945 in Okemah, OK, he went on study at the Otis Art Institute in Los Angeles and received his MFA from the Cranbrook Academy of Art in 1973. McGraw lives and works between Los Angeles, CA and Okemah, OK. Today, his works are in the collections of The Metropolitan Museum of Art in New York, the Cranbrook Museum of Art in Bloomfield Hills, MI, and the Library of Congress in Washington, D.C., among others.

Both exhibitions open October 27 and will remain on view through November 25.

This event is FREE to attend.