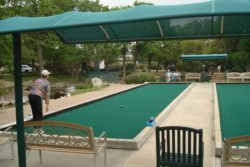 The City of Torrance will gather to mark the Official Opening of Bocce Courts at Columbia Park on Saturday, December 10 at 10 a.m.

Bocce is a sport similar to lawn bowling played on a court that is about 90 feet long and about 12 feet wide. A game can be conducted between two players or two teams of up to four players each. Players attempt to score points by rolling a ball down the court and getting the closest to a smaller ball called a pallino.

Local bocce advocates approached the City requesting that consideration be given to constructing Bocce Courts at Columbia Park. The group donated $21,483 for the project. On April 14, 2015, the City Council appropriated the donation, and additional funding was allocated to the project from Parks and Recreation Open Space Funds.

“I am happy to say that we are pleased with the overall result of the new fully accessible Bocce Courts at Columbia Park. They are now ready to be enjoyed by present and future generations of Torrance residents,” said John Jones, Community Services Director.

The City thanks the community for its patience, cooperation and support throughout the renovation process, and invites the public to join in the celebration of the Columbia Park Bocce Court dedication.

The Bocce Courts are located in Columbia Park at 4045 190 Street, near the east parking lot off Prairie Avenue.