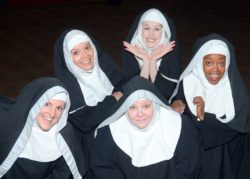 Palos Verdes Performing Arts presents a production of Nunsense! January 20 through January 29 at The Norris Theater.

Before Sister Act and Late Nite Catechism, there was Nunsense! Revel in the madness of this hilariously funny musical comedy, featuring a troupe of dancing, singing, joke-cracking nuns. The award-winning hit show played off-Broadway for a record-breaking run, and is now an internationally acclaimed, must-see phenomenon.

Nunsense! follows the crazy antics of five nuns from the Little Sisters of Hoboken convent. When their cook accidentally serves some tainted soup, poisoning 52 of the sisters, the five surviving nuns must band together and put on a variety show to raise money to “clean out the freezer.” The wildly chaotic variety show is filled with 25 original songs set to a live orchestra with lots of comic surprises.

For additional information and ticket purchase, call the box office at (310) 544-0403 or visit the website at http://www.palosverdesperformingarts.com.