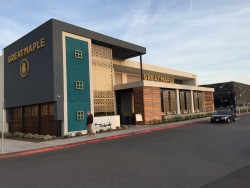 I swear this is a restaurant review. It’s just going to take me some time to get to the part about food.

FYI – I’m not much of a shopper – but on occasion, I do need to head to the mall to stock up on certain items all in one fell swoop….a particular brand of lipstick, a pair of ballet flats, maybe a new LBD for an event.

Whether you are a veteran shopper, or someone like me that only goes when necessary, we’ve all experienced the ‘shopping coma’.

After so many hours walking around, taking in all the glitz and sales and seasonal must-haves, we need a break, which generally involves coffee and a pastry or a sit down meal.

A few months ago, I headed over to the new Del Amo Fashion Center with my list and spent hours roaming the stores, buying what I needed. As the coma set in, I went in search of food and walked into Great Maple. I was by myself, sat at the bar and was desperately in need of nourishment to keep me going. While I vaguely remember the large space, I don’t remember what I ate…. but it carried me through the rest of my shopping excursion.

Last weekend, my husband and I were enjoying a lazy Saturday – I went to a yoga class and weeded the rose bed; he cleaned the BBQ and took a nap – and decided to go out for an early dinner since we had to get up at a ridiculous hour the next morning and drive to San Diego.

JB hadn’t yet seen the renovations at Del Amo and wanted to check it out. I mentioned there were a few new restaurants we might want to try, so that was our destination.

We strolled throughout the mall, riding escalators, walking into stores, taking photos of the various seating options and ‘living walls’. We exited near Macy’s and walked the length of the still-under-construction Restaurant Row. We passed Lucille’s (a long-time favorite of ours), and stopped to look at the menu at Frida’s before ending up at Great Maple. There was a menu posted at the entrance and we both spotted items that sounded intriguing so we walked in. It was that quiet time in between a really late lunch and traditional dinner hours and we were seated immediately.

JB and I are both obsessed with architecture – the construction, design, concept – and we sat there considering the space for a while before picking up our menus.

This is where it gets interesting.

JB looked up from his menu and asked me, “Is this a French restaurant?” Pointing to my menu, I replied, “Well, they have popovers as a starter, and that’s English.” Then he said, “From the outside, it looks like a Chinese restaurant.” I agreed, “Yes, that screen has a certain Oriental style.” Then he asked, “What’s with the name? Great Maple sounds Canadian.” I sat back, thought about this for a moment, looked at the décor, and replied, “Maybe it’s French Canadian.”

At this time, our server came by and asked if we’d like to order a drink….to which JB replied, “We’re confused.”

I asked her if it was a French Canadian restaurant and she said, “No, it’s totally American.” Then I asked about the name, “Why Great Maple?” She explained that it’s a great company to work for and that a Maple signifies strength. I pointed to the place mat, a map that referred to the different Torrance ‘arrondissements’ – districts, in French. She then explained that it was a sort of European eatery. JB repeated, “We’re confused.” and asked her to come back in a few minutes.

We were so immersed in trying to figure out the menu, décor and concept, we ended up sending her away four times. She was very sweet and put up with us, mostly because JB had that very confused look on his face.

Meanwhile, there was something trying to scratch its way to the surface of my conscience….it took a while but I finally figured it out. The interior was decorated in the style of the Belle Epoch era. If you aren’t familiar with it off the top of your head, go and watch the classic movie Gigi or the highly stylized Moulin Rouge or just look up the artist Toulouse Lautrec. Great Maple is designed in the manner of a European Brasserie. Once we figured that out, we were ready to order something to eat.

We had to order the popovers as a starter, just because I don’t know that I’d ever eaten one. They were delivered in a paper bag which the server shook for a while before placing it on the table. They were hot and steamy, served with honey butter and vanished immediately. If I had ever eaten a popover previously, it didn’t taste anything like these – delicate and savory, with the butter adding a sweet note.

JB asked our server for a recommendation (he was still confused) and ordered the Fired Fennel Pork Chop – a 10 ounce pork chop with braised mustard greens, bacon, white beans and apple butter.

I went back and forth for a while between three or four dishes, unable to make up my mind until our server mentioned each was a pretty large serving. So I ordered one of the Petite Plates, the Tarragon Fried Chicken with Tarragon Cream and Potato Batonettes. We also ordered the Fresh Polenta, one of the house specialties, for us to share.

I don’t think either of us had ever seen such a diversity of dishes coming out of one kitchen. We sat there watching as food was delivered to the tables around us and everything looked fantastic – Fish and Chips, a Beef Brisket Sandwich, Portobello Mushroom Fries, and Skillet Cheese & Buttered Apples….our mouths were watering.

JB’s pork chop was a substantial portion and it looked and smelled amazing. He was gnawing on the bone before I realized I never had a chance to taste it. Yep, according to JB, it was that good….and I’ll have to take his word for it.

My fried chicken was exceptional. The serving consisted of two meaty legs and a butterflied cutlet. The coating was perfect, crunchy on the outside and moist on the inside without a drop of grease. The tarragon flavor was subtle. Sometimes herbs can be overwhelming, this was not.

The bowl of polenta was HUGE. I always think of polenta as a side dish but this was entrée sized. It was topped with pecorino cheese and fresh chives. The menu refers to it as slow-cooked and ‘creamy’ and while it was very flavorful – the chives gave it a nice bite – I wouldn’t call it creamy. Even though it was a bit denser than I prefer, we both enjoyed it and took home what we couldn’t finish.

JB ordered an espresso, and we eyed a plate of gorgeous donuts as they were delivered to a table near us, but we were stuffed and had no room for desert.

I’m really looking forward to returning to Great Maple to try more of their menu items. There are so many options, everyone will find something to suit their taste.