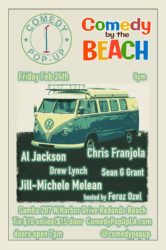 Comedy Pop Up presents Comedy by the Beach on Friday, February 24 beginning at 8 p.m. at Samba Brazilian Steakhouse in Redondo Marina.

General admission tickets are available starting at $10 online at http://tinyurl.com/zz682t6 and $15 at the door. There is plenty of onsite parking for only $2 with validation.

For additional information and ticket purchase, visit the website at http://www.comedypopupla.com/.