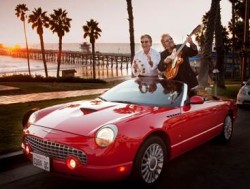 David Pack, noted hit-maker with the popular 70s/80s band Ambrosia, is excited to announce the debut performance of his new group Beato Band. Saint Rocke in Hermosa Beach will host the album release concert on March 3 at 8 p.m. and the set will feature original songs and classics from the debut self-titled Beato Band album which is set for release on February 26.

David will open the evening with a special acoustic performance of some solo and Ambrosia hits and favorites.

Beato Band takes its name from Pack’s oldest friend and musical partner Fred Beato. He is known throughout the music industry and the founder and CEO of Beato Bags Inc, the #1 US-made drum bags in the world for over 30 years. But Pack and Beato’s musical journey began when they were Torrance High School bandmates in the rock-and-soul group Symbols of Tyme. In 1968, the Symbols won the entire U.S. Battle of Bands – Fred and David were just 15 years old.

They just released their first single, “My Old Friend,” exclusively on YouTube – the video and lyrics tell the story of the friendship and musical history between Pack and Beato, even name-checking their high school band, depicting them playing outside their alma mater, while cruising around their old haunts in the South Bay of LA and the beaches of OC. To view the video, visit the YouTube page at https://www.youtube.com/watch?v=XQNEXYhpN7Q&feature=youtu.be.

The track garnering the most industry attention is Cuba BC, a 7-minute epic telling the true-life story of Beato coming to American as a refugee fleeing Castro’s Cuba at just 10 years of age, and his unlikely journey to Los Angeles and to great success in the drum bag industry (his bags are used and endorsed by greats like Steve Gadd and Luis Conte – even Ringo owns a few of his bags.)

Other tracks include the ballad “The Path We’re All On” co-written by Steve Porcaro of Toto fame; as well as a new version of the first song that Fred ever heard by Elvis after coming to America – “Treat Me Nice.”

Another Symbols of Tyme member Tom Croucier, will join the band on bass at Saint Rocke, along with noted Cuban pianist Iliana Rose, and guitarist Jeff Kollman. David’s opening set will include a surprise special guest.

The band is encouraging their friends, fans and classmates to assemble at Saint Rocke 10 p.m. on March 3 for a group photo before the show!

Tickets are $25 per person. You must be at least 21 to attend the show.

For additional information and ticket purchase, visit the website at http://www.saintrocke.com/event/1070575-beato-band-cd-release-david-hermosa-beach/.